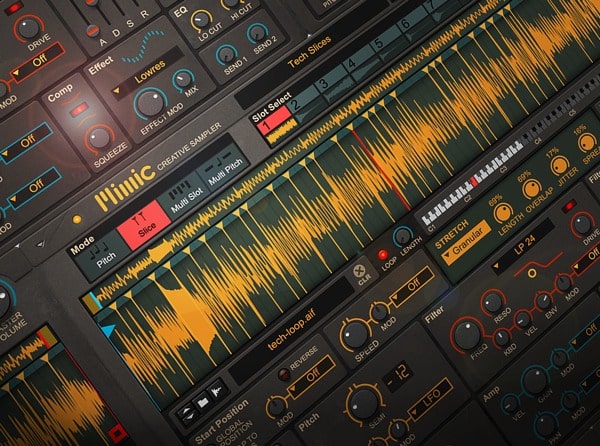 Studio expert Thomas Cochran presents a comprehensive set of Mimic video tutorials! Mimic is Reason’s latest sampler, and it’s filled to the brim with lots of powerful features and tools. This video course will quickly get you up to speed on this sampler and have you designing your own unique, expressive sounds in no time. Thomas begins with the basics, getting you familiar with the sampler’s layout and features, before covering the more specific and advanced features of the software, including using Reason’s Pulverizer, RV7000, The Echo, and MClass EQ to enhance Mimic’s sound. These videos are for beginning Mimic users.

Thomas welcomes you and begins with a basic overview of Mimic’s layout and feature set. He then moves on to demonstrating how audio can be loaded in the Sampler Editor Window and can be processed via the various time-stretching and pitch adjustment algorithms for different effects. Next, he moves on to the device modes, including Pitch and Slide modes along with Multi Slot and Multi Pitch modes.

Continuing on, you’ll explore the sound modifiers and envelopes. The Filter and Amp allow you to process your samples (or layered samples) just like a synthesizer, with independent control over various parameters such as filter cutoff, resonance, and more, while the envelopes provide a method of automatically applying these controls over time. The LFO provides another alternative to adding modulation over time.

Throughout the rest of the course, you’ll discover how to apply Mimic’s effects, such as compression, high/low pass filters, distortion and more. And you’ll also learn how to tweak some general settings of the sampler, such as portamento, polyphony, and others. Thomas closes out the tutorial by designing two patches – a Reese bass and a pad sound – so you can see exactly how it’s done!

To see exactly what’s contained in these in-depth Mimic tutorials, and how they’ll make creating loops and sounds quick, fun, and easy, see the individual Mimic video tutorial descriptions on this page. If you can imagine it, you can create it with Mimic, and this video series will teach you how. Watch “Mimic Explained®” now!