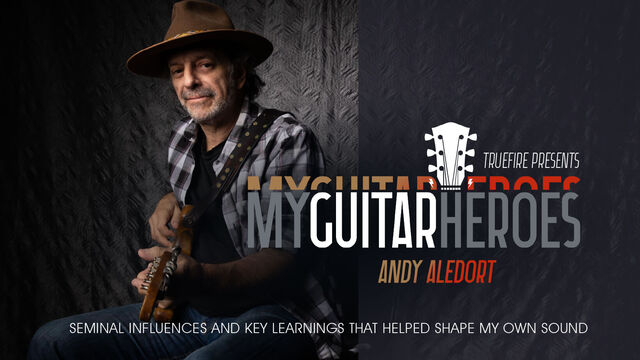 Every musician has a long list of other musicians, past and present, that have inspired, influenced and helped shape their own sound and musicality. It’s the natural evolution of music. We asked Andy Aledort to pass on to you some of the key learnings that were passed on to him from his own Guitar Heroes.

”BB King, Freddie King, Albert King, Jimi Hendrix, Eric Clapton, and Duane Allman are just a few of the players that greatly influenced my sound and I’m certain they’ve also influenced many others.”

As you work through the course, Andy will show you a few of the techniques and approaches that he picked up from each one of the artists and then you’ll apply those techniques and stylings, over backing tracks, in a series of soloing performance studies.

”BB King is to my mind the single most influential electric blues player of all time. I’ll show you some of the ways he influenced my own blues playing and I suspect, many others.

Next up, a force of nature as a singer and a guitar player unlike any other, Freddie King. We’ll examine some of his signature influences. Of all the blues guitar greats, Albert King has the most singularly unique style and sound of any of them. We’ll play in his style as well.

Jimi Hendrix is my favorite musician that ever lived. He completely changed the nature of the electric guitar in EVERY way imaginable. Another giant influence, Eric Clapton spearheaded the British blues movement that ultimately changed the direction of popular music in the late 60’s.
We’ll wrap up the course with Duane Allman — one of the greatest blues rock players ever but he crafted a style and technique of slide guitar that is unparalleled and significantly informed the way I learned to play slide guitar myself.”

In this course, Andy will first introduce her heroes to you and describe why he found them so influential. After each discussion, Andy will then present a performance study illustrating those influences in a musical context, over a backing track. A breakdown follows every performance and Andy will explain and demonstrate all of the key concepts and approaches in play.

You’ll get standard notation and tabs for all of the performance studies. Plus, you’ll be able to use TrueFire’s learning tools to sync the tab and notation to the video lesson. You can also loop or slow down the videos so that you can work with the lessons at your own pace. All of the backing tracks are included to work with on your own as well.

Grab your guitar and let’s dig in with Andy Aledort!